I’ve got a new piece out, led by Alexandra-Maria Klein and a number of other colleagues, in the form of a book chapter in the new book Global Forest Fragmentation, just released from CAB International. Our chapter is titled “Forest islands in an agricultural sea,” and covers the literature on ecosystem interactions and services from forests and between forests and agriculture. (It therefore, naturally, comments on the interminable land-sparing/sharing debate.) A full abstract below for those interested in that sort of thing.

The “oldie” is actually precisely our piece on land-sharing & sparing, and trying to move forward, written with many of the same colleagues as above. It was published last year in Conservation Letters, and is basically just what it says on the tin: “Land sparing versus land sharing: moving forward.” The piece is open access, so you can enjoy it in all its glory for free. But here’s just a taste (the first hit is always, erm, more free):

To address the challenges of biodiversity conservation and commodity production, a framework has been proposed that distinguishes between the integration (“land sharing”) and separation (“land sparing”) of conservation and production. Controversy has arisen around this framework partly because many scholars have focused specifically on food production rather than more encompassing notions such as land scarcity or food security. Controversy further surrounds the practical value of partial trade-off analyses, the ways in which biodiversity should be quantified, and a series of scale effects that are not readily accounted for. We see key priorities for the future in (1) addressing these issues when using the existing framework, and (2) developing alternative, holistic ways to conceptualise challenges related to food, biodiversity, and land scarcity. 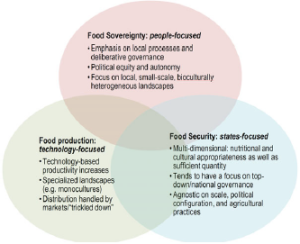 Food production: technology-focused. Much literature on the written history of hunger has come at it from the perspective of “too many people, too little food,” and thus has looked at remedying famine and chronic hunger through increasing food production. Gains in productivity from the Green Revolution are widely thought to have prevented millions of people from starving (Evenson & Gollin 2003), and to have “benefited virtually all consumers in the world” (Pingali 2012). Reduced prices due to higher food supplies are thought to particularly help the poor, because they spend relatively more of their income on food (Pingali 2007).

Food security: states-focused. Food security can be defined as physical and economic access by all people in a society at all times to enough culturally and nutritionally appropriate food for a healthy and active lifestyle (e.g., Food and Agriculture Organization of the United Nations [FAO] 1996). This multidimensional definition was developed in response to research showing that “starvation is the characteristic of some people not having enough food to eat. It is not the characteristic of there not being enough food to eat. While the latter can be a cause of the former, it is but one of many possible causes” (Sen 1981). Further, lower prices from higher food productivity can even cause increased hunger, because they can reduce profits and wages for poor farmers (Stone et al. 2002; Aksoy & Isik-Dikmelik 2008).

Food sovereignty: people-focused. Food sovereignty defines “the rights of local peoples to determine their own agricultural and food policy, organize production and consumption to meet local needs, and secure access to land, water, and seed” (Wittman 2010). It is viewed by proponents as a corrective to the inadequacies of “food security,” which “avoided discussing the social control of the food system. As far as the terms of food security go, it is entirely possible for people to be food secure in prison or under a dictatorship” (Patel 2009). Food sovereignty is based on the idea(l)s of political agency and autonomy. It insists that the optimal configuration of a food system should not be taken for granted and left purely to markets or possibly unrepresentative governments, and instead must involve deliberative action by citizens at local and regional, as well as national levels (Chappell 2013).

There is an interesting new paper on sparing & sharing out in PNAS, I should note, by Hertel et al., finding that “Global market integration increases likelihood that a future African Green Revolution could increase crop land use and CO2 emissions”. They find that “sparing” appears to have happened in the past, and that it would not happen in the short-term if Africa intensified, but would in the long-term. It is a very sophisticated paper, though I have one specific reservation about their model that I will get into some other time. I also have a broader reservation that I will get into right now: that they say measuring reality vs. the counterfactual–i.e., what would have happened had history gone differently (in this case, lack of agricultural intensification from the Green Revolution)–and that this is the better test of sparing (rather than whether or not intensification and agricultural land use are contemporaneously negatively correlated). My problem is their assumption of the counterfactual–that is, that the scenarios they model are the most likely or suitable alternative history. But a sensitivity analysis is not enough to determine this–it seems likely, if not probable, that there would have been a regime change–or many of them–had the Green Revolution not occurred (or occurred  differently or for different reasons). So they assert that they have now done the “proper” test to detect land-sparing, but choice of counterfactual is not something that can come from on high, or even be easily tested for accuracy. (It is, after all, an alternative history.) But considering that the Green Revolution is so-named because the idea was that producing more agriculturally would head off a “Red”–i.e., communist–revolution, it seems a little rich to claim that one has found a “proper” counterfactual, assuming that nothing else had changed but the rate of increase of agricultural productivity.

Anyway, an argument for another time. Here is the abstract for the newest piece, sportsfans:

Forest islands in an agricultural sea:

Under the current scenario of continuing human population growth, achieving high agricultural yield while conserving forest biodiversity is challenging scientists and policy makers alike. There is ongoing debate as to whether biodiversity should be integrated on the same land (land sharing) or separated from agriculture (land sparing). Here, we present examples of land-sharing practices (agroforestry systems and multipurpose forests) and demonstrate that forest biodiversity conservation does not necessarily compromise crop yield. There is no simple trade-off between biodiversity and yield, and the complexity of crop yield-biodiversity relationships has not yet been fully investigated, at either the habitat or the landscape scale. We argue that land-sparing management has to be considered at different spatial scales. Agriculture in large-scale land sparing (intensive agriculture separated from forest remnants) generally does not benefit much from ecosystem services mediated by forest biodiversity, but small forest remnants can enhance biodiversity in large agricultural and forestry plantations. Small-scale land sparing (intensive agriculture connected to forest remnants) promotes beneficial organisms and their associated ecosystem services. In such landscapes, wild beneficial organisms, e.g. a diversity of pollinators, can enhance and stabilize crop pollination in intensively managed fields due to spillover from forests into crop fields. Functional connectivity of forest remnants (single trees, treelines, hedgerows and forest patches) in high-input agricultural landscapes can enhance biodiversity and ecosystem services, but future research needs to consider connectivity at various land-sparing scales to evaluate their conservation effectiveness. Furthermore, landscape developments minimizing possible adverse consequences of forest conservation on crop production are currently often overlooked but need to be considered in future research and landscape planning. We argue that both land sharing and land sparing can promote biodiversity without compromising high yields, and that a combination of management strategies at different spatial scales, including the maintenance of forest connectivity, may most effectively safeguard both biodiversity and livelihood security.

Find out about your paywall’d copy here!