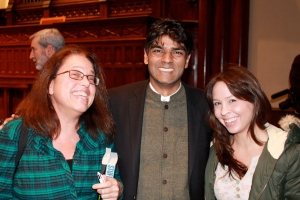 The First Congregational Church in Portland, OR was buzzing with people. I looked around, as I often do at events like this, and noticed that the crowd was primarily white, and seemingly middle and upper class. Where was everyone else? Where were the refugee farmers that I’ve met at the PSU farmers market? Where were the immigrant gardeners depicted in Growing Garden’s www.growing-gardens.org informational clips? Why aren’t they here? Although the crowd certainly lacked in diversity, there were people of all ages present, eagerly awaiting to hear Raj Patel. And as he approached the podium, the entire room, both the first and second floors, moved forward to the edge of their seats. 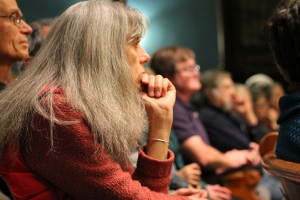 He began with paradoxes. He described how the people who are starving in the world are the same people working in agriculture. He reminded us that poverty has caused both the the obesity epidemic in the developed world and hunger in the less developed world. He explained that even though India is a nation afflicted with rampant extreme poverty, four out of the top ten richest men in the world are from India (according to Forbes). And without hesitation, he attributed all of these realities to the effect of the global corporate system. But to understand this cause and effect relationship required a lesson in world history. 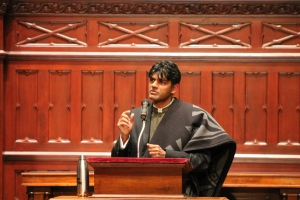 So, we arrived in British colonial India. Already beaming with charisma, Raj preceded to tell us the history of wheat production in India. He discussed how the transition from a moral economy to a capital economy resulted in the starvation of hundreds of thousands of peasant farmers due to their inability to afford the food they were producing. He emphasized that this wide spread starvation occurred at a time when India produced the greatest amount of food in the world. Certainly, this was and continues to be a story told around the world.

Then, of course, there was a discussion of corn and NAFTA, biofuels and land grabs, Coke, Pepsi, and diabetes, and so on. 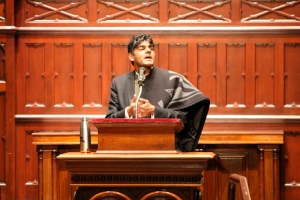 Raj dazzled us with humorous analogies from time to time. The one that garnered the most laughs was probably the analogy he used to describe the World Bank and WTO; comparing them to the guy who punches Robinhood in the face in the film, “Time Bandits.” He dispelled any myths of the existence of a “free market” in food, stating that the US industrial agricultural complex accrues billions of dollars in both profits and government subsidies, while farmers in Haiti make merely $2 a day.  The audience was captivated, welcoming every insight Raj offered. One insight after another, Raj pushed and we were moved. 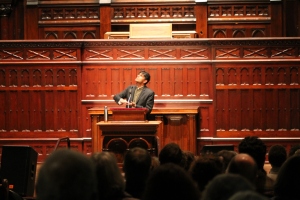 Enlightened, enraged, and impassioned, Raj gave us all one final push. He moved us to see another reality. He charged us with the task of imagining and supporting alternatives to the global corporate system. He walked us through the successes of the Slow Food Movement and La Via Campesina’s Food Sovereignty Movement. He brought us to a small farming community within southern Malawi and juxtaposed the successes of this vibrant and culturally rich community with the extreme hunger and poverty that afflicts the rest of the country. Then, in a tone that felt as if he were looking directly into each and every one of our eyes, he reminded us that food protests radically mobilize people. Food protests produce change. He painted images of the women’s suffrage movement, civil rights movement, farm workers and labor unions, and so on. Personally, I thought of Egypt. Humbled and moved, we applauded. Then we picked up our torches and left galvanized.